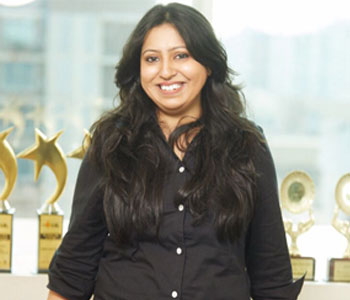 Binda has over 14 years of experience in Marketing, Brand Management, Digital Intellegence & Consumer Analytics. She comes with a deep understanding of the Indian media and entertainment space and has led marketing campaigns across categories for different markets. She has been awarded by BBC Knowledge as one of ‘the Greatest Marketing Influencers of 2017.

She currently heads marketing for Red Chilies Entertainment and is responsible for customer loyalty and creating business opportunities across platforms. She has led 360 degree campaigns for wide range of movies like Dilwale, Raees, Dear Zingagi, Jab Harry Met Sejal, Ittefaq and ongoing projects like Zero and Badla.

She has also led the marketing initiatives for Kolkata Knight Riders (KKR) in 2016, developed the #AmiKKR campaign, which deeply resonated with the fans. KKR became the first team to have an exclusive television show, called ‘Knight Club’ on Star Sports and the fan engagement rate on social media not just surpassed other IPL teams, but also long established teams with global following like Manchester United, Barcelona, Liverpool, Manchester City and Chelsea.

During her stint at Star India, she has steered strategic projects for their Hindi, Regional and English Entertainment channels. She was instrumental in developing campaigns such as‘Rishta wahi, Soch nayi’ for Star Plus, which catapulted the brand back to its leadership position, ‘Cholo Paltai’ as the war cry for Star Jalsha launch in West Bengal, which connected with the audience at a personal level and took the channel to the #1 position and ‘Watch with the World’ for Star World Premiere’s launch, which created a paradigm shift in TV viewing trends in India.